In King’s Landing
With their wedding hours away, Tyrion (Peter Dinklage) meets with Sansa (Sophie Turner) and tries to ease her apprehension at the prospect of being his wife. In the Sept of Baelor, Queen Cersei (Lena Headey) intimidates Margaery (Natalie Dormer) with the story of House Reyne of Castamere, and how her father Tywin (Charles Dance) destroyed the Reynes root and stem when they rebelled against House Lannister. After arriving at the Sept, Sansa is walked down the aisle by King Joffrey (Jack Gleeson). In an effort to embarrass his uncle, Joffrey departs with the stepstool Tyrion was to use to cloak Sansa with the Lannister colors; however Tyrion gets Sansa to kneel, and they are soon after married.

At their wedding feast, Tyrion gets very drunk, irritating both Sansa and Tywin, who counsels his son to stop drinking and begin trying to conceive a child with his new wife. Joffrey, after threatening to rape Sansa, calls for the traditional bedding ceremony to begin, but his plan is thwarted when Tyrion threatens to castrate Joffrey. Tywin diffuses the situation, and Tyrion is able to avoid punishment, using his intoxication as an excuse. Tyrion soon after departs the feast with Sansa. Though Tywin has ordered Tyrion to consummate his marriage, he tells Sansa he will not share her bed until she wants him to.

At Dragonstone
Melisandre (Carice van Houten) returns to Dragonstone with Gendry (Joe Dempsie). She then takes him to see King Stannis (Stephen Dillane), who recognizes Gendry as one of Robert’s bastards. When Gendry is taken to his chamber, Stannis and Melisandre discuss what they intend to do with him. In the dungeons, Davos (Liam Cunningham) continues to learn to read. Stannis visits him to discuss Melisandre’s plan to sacrifice Gendry. Davos objects to the plan, seeing Gendry as a nephew to Stannis, but Stannis remains resolved. He then makes Davos swear to never try to kill Melisandre, and frees him.

Later, Melisandre visits Gendry, and after a short discussion, she disrobes him and they begin having sex. Melisandre, who has ealier stated that there is “power” in Gendry’s kingly blood, then binds Gendry’s hands and legs and lays three leeches on him to draw his blood. Afterward, Stannis arrives and ritually burns the leeches, speaking the names of Robb Stark, Balon Greyjoy, and Joffrey Baratheon while he does.

In the Riverlands
Arya (Maisie Williams) tries to kill Sandor “the Hound” Clegane (Rory McCann) while he is sleeping, but he is revealed to be awake, and thwarts her attempt on his life. They depart their camp and head for the Twins, where Clegane intends to ransom Arya to her brother, Robb.

Across the Narrow Sea
Ser Jorah Mormont (Iain Glen) tells Daenerys (Emilia Clarke) that Yunkai has employed a mercenary group called the Second Sons, which is led by a man named Mero (Mark Killeen). Daenerys soon meets with Mero and his lieutenants Prendahl na Ghezn (Ramon Tikaram) and Daario Naharis (Ed Skrein). She attempts to bribe Mero to renege on his deal with Yunkai and fight for her, and gives him two days to make a decision. In the Second Sons’ camp, the three leaders plot to kill Daenerys that night, with one of them sneaking into her camp. By random draw, Daario is selected to carry out their plot.

After nightfall, Daario enters the camp, disguised as an Unsullied soldier. He enters Daenerys’s tent and shows both her and Missandei (Nathalie Emmanuel) the severed heads of Mero and Prendahl. He then pledges the Second Sons, as well as himself, to her cause.

North of the Wall
Sam (John Bradley) and Gilly (Hannah Murray) continue their journey back to the Wall. They stop at an abandoned hut for the night and discuss a name for her son. When they hear a large number of crows cawing nearby, Sam leaves the hut to investigate. Soon after, he is attacked by a White Walker, which shatters Sam’s sword with mere touch and tosses him aside. The White Walker steps closer to Gilly, intent on taking her son, but Sam stabs the Walker with his dragonglass dagger, killing it. Sam and Gilly then flee into the night while being chased by a large number of crows, leaving the dagger on the snow

This one killed me: 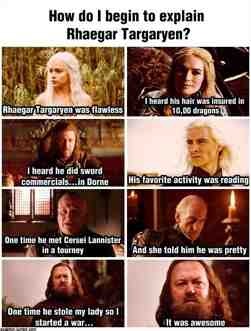 So did Sam just leave the magic dagger that can kill White Walkers on the ground? Do people in fantasy novel’s ever read fantasy novels?